The Denver Press Club on Wednesday honored Mike McClanahan, a longtime member and one of only two people who have attended all 25 of its annual Damon Runyon Awards, with a place on its famed caricature wall.

McClanahan, who previously served on the Press Club board and designed an early version of the Club’s website, has been a member of the Club since 1994. He joined the night of the first Runyon award banquet, which honored the late New York Daily News columnist Jimmy Breslin.

Shortly after becoming a member, McClanahan joined a group of poker players — part of a game that’s now gathered in the Press Club basement for 26 years every week.

“Mostly, I’m just proud to be up there with my friends and poker players,” McClanahan said during his induction on Wednesday night.

McClanahan remarked that the Club has connected various parts of his life — from those of his family to his colleagues.

“You can’t come down here and not meet interesting people,” he said.

The Press Club’s caricature wall features a mix of famous local journalists, past Club presidents and people who have offered significant service to the Club as a volunteer — all of whom are selected by the Club’s sitting president. The wall differs from the Press Club Hall of Fame, which annually honors local journalists and those who have given significant service to the Club, though many people in the Hall of Fame are also honored with a caricature.

Most of the wall’s caricatures were drawn by the late Club member Gene Tool. More recently, the caricatures — including McClanahan’s — have been drawn by local Denver artist Jane Yamada. McClanahan’s is the 138th caricature to be added to the collection.

Last year, Club members redesigned the wall, changing the background color from yellow to maroon red and shrinking the size of caricatures to open more space for additional people to be added.

“He was invited by a friend to the very first Runyon,” said current Press Club President Dan Petty, speaking during the induction ceremony. “And I guess for some crazy reason decided that night he was going to join and become a member. We have enjoyed your presence ever since.”

Petty told roughly 40 people gathered in the Club’s Fourth Estate Dining Room that he was thankful for the guidance and wisdom McClanahan has provided during his presidency and during the summer of 2016, when the Club was facing severe financial challenges, comments echoed by former president David Milstead.

“Mike McClanahan is one of the most dedicated, veteran members of the Club,” Milstead said in a statement. “His service to the Club has been formal — he served on the board over a decade ago, and assisted with a previous version of the Club’s website. It’s also been informal: At many of the troubled times the Club has gone through, he’s served as a diplomat and peacemaker, seen by many as an honest broker of the Club’s challenges. It is hard to imagine the Club over the past quarter-century without Mike McClanahan.

McClanahan has served in supportive roles with several other groups. He is an active member of the Mystery Writers of America, Lighthouse Writers Workshop, Rocky Mountain Fiction Writers, and according to his peers, he always asks others for feedback about his writing.

“He is very skilled with language, and I have always admired that,” Denver Post investigative journalist David Migoya said to those in attendance, adding that he has read and enjoyed McClanahan’s work for years. Migoya said that McClanahan’s writing skills often transfer to the table. “His vocabulary is vast,” Migoya said.

During the ceremony, Nosbisch joked that he was anxious to hear McClanahan — known for his occasional salty language — swear for the first time in their friendship. He said McClanahan was friendly and conversational.

Before the caricature was unveiled to those gathered, McClanahan thanked those in attendance, but not before entertaining Nosbisch’s request by swearing to start his remarks, drawing laughter from the crowd.

In addition to designing an early version of the Press Club website, McClanahan has written a detailed history of Damon Runyon, a columnist for Hearst newspapers from Pueblo, Colorado, and an early Club member. The annual Runyon Awards are the Club’s largest fundraiser and are held in honor of a journalist of national import who embodies the moxie and spirit of Damon Runyon. McClanahan said that the act of writing is best captured in a quote by former Press Club member Gene Fowler:

“Writing is easy. You only need to stare at a blank piece of paper until drops of blood form on your forehead.” 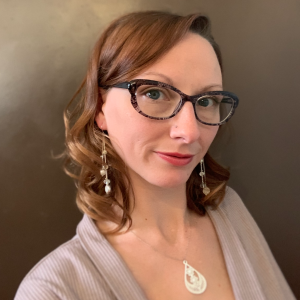 Heather Davis is a student at Metropolitan State University of Denver.